Australia in Japan: a tale of two teams

Observing the story of Australian business in Japan in recent times is a little like watching two different Australian sports teams.

The export story is like watching the all-conquering Australian women’s Sevens rugby team, which recently took home Olympic gold. Full of highlights, they’ve been good to watch and delivered the goods.

However the investment story of Australian companies in Japan reminds me more of watching the Wallabies rugby team. Very few highlights in the reel, quite a few knock-ons and you have to ask what exactly is going wrong given the talent on offer.

But let me begin with that high-performing team.

In short, the Japan-Australia Economic Partnership Agreement (JAEPA) which came into force in January 2015 has had a very positive impact on Australian exports to Japan.

The agreement provides preferential access for Australian goods and services to the Japanese market by moving towards a zero-tariff regime in most product areas and slashing duties in traditionally protected sectors such as agriculture.

When fully implemented, over 99 per cent of Australian exports to Japan will be receiving preferential access or enter the market duty-free. It is by some distance the most open trade agreement Japan has ever concluded with another major trade partner.

For certain export areas, notably agricultural food and beverage, JAEPA has been the catalyst for a major boost in export volume. The table below outlines some of the percentage gains in individual product exports over 2015.

Clearly this suggests that a new chapter is being written in the trade relationship, thanks to JAEPA. 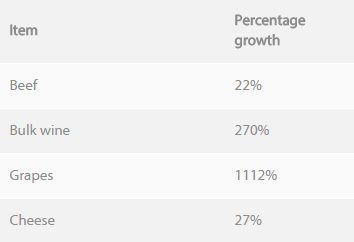 NEEDS TO PUT IN MORE

That said it hasn’t all been one-way traffic. Like all teams, the export side has some areas where improvement is still needed.

Notably, Australian exports of higher education (post graduate) to Japan have been on a continual decline since 2010.

This is an area where renewed focus is warranted, given the life-long links that often tend to be the by-product of education in a foreign country. That said, overall the export team have clearly delivered the goods.

There have been some individual performances worthy of highlighting. Most noteworthy perhaps was the success of innovative medical company Mesoblast in achieving approval for sales of regenerative medicine into the Japanese market earlier this year.

This is a great example outside of the traditional sphere of Australian exports to Japan.

MUST PULL THE SOCKS UP

This uplifting export story contrasts with the performance of the ‘other’ team, namely Australian direct investors into Japan.

The sad story is there are still only about 50 Australian companies operating on the ground in Japan. This is a woefully small number compared with the over 1000 companies who export to the country.

It is correct to observe the composition of major Australian exports to Japan, consisting mainly of primary produce, may not lend itself well to having (or requiring) on-ground presence beyond perhaps industry-level representation.

The scale of difference cannot be explained simply by export profile, nor by market size – Japan is after all Australia’s second-largest trading partner.

To switch to cricketing analogy, Australian director investors in Japan are barely troubling the scorers.

To try and get a little insight into this question, the Australia-NZ Chamber of Commerce in Japan (ANZCCJ) recently polled their members on why they think there are not more Australian companies operating in Japan.

The results sadly were fairly predictable and they boil down to there being a perception and awareness issue.

Overall, it is the perception issue which needs to be addressed. We need our Australian companies to be more ambitious and more objective about the opportunity that exists in Japan.

These perceptions stand in stark contrast to what Australian companies in Japan are saying about their own fortunes.

From Australian company contributions to the annual Foreign Chambers in Japan business surveys (see left) we can see they are positive about their business in Japan, albeit we have seen some recent weakening of sentiment.

Most notably the majority of Australian companies operating on the ground in Japan have a growth strategy - in a market Australians would generally view as in decline.

That is backed up from our own ANZCCJ member survey a week ago (bottom right chart), where over 50 per cent of respondents have expanded their business in Japan in the last 12 months.

That’s because one interesting side effect of the policy stall in Japan and its inability to reflate the economy has been to accelerate the interest of corporate Japan in offshore opportunities.

We see Japanese companies are more actively and more urgently looking to invest and they are often looking to partner into overseas exposure. This covers a broad spectrum from financial investors, resource off-takers through to direct equity investors.

Australia itself is certainly one focal point for offshore expansion but areas such as ASEAN are the scene of the largest increase in Japan Inc activity over the last 18 months.

There is clearly an opportunity for Australian companies to work with and support the Japan Inc agenda.

But I would argue it is something many Australian companies need to be on the ground in Japan to fully leverage, to have fully developed those relationships which can then be regionalised - which highlights the opportunity cost of Australia’s current weak private sector presence on the ground.

This doesn’t mean partnering won’t happen – in fact Japan is showing the way through some interesting Australia-based ventures which leverage local strengths to tap Asian demand.

A great recent example is the Mitsubishi Group subsidiary Kaiteki Fresh, which exports fresh and packaged vegetables out of Australia into high-end supermarkets in Hong Kong and Singapore.

LONGREAD: the second wave of Japanese investment in Australia

Australia and Japan share an enduring history of business collaboration that has created significant value for both economies.
Asia Pacific

Japan’s workplace culture is at a crossroads

In a society where being part of a group has traditionally mattered above all else, Japanese people are coming to demand more choices about the way they live their lives. The needs of the individual and the pursuit of personal happiness have come to matter more.
Asia Pacific

LONGREAD: Is Japan a boiling frog?

Doubtless the anecdote of the boiling frog is familiar: if a frog is placed in boiling water, it will jump out but if it is placed in cold water that is slowly heated, it will not perceive danger and will be cooked to death.