Major-General Jim Hughes died in his sleep about two months ago. The funeral was well attended but attracted no interest from the media. After all, the Army has dozens of generals so one would hardly be missed, right?

But what if this general were a once-in-a-lifetime ace at leadership, a subject which seems to obsess the Australian corporate world at the moment? And what if he effortlessly demonstrated most of the key principles of leadership?

"The best military leadership is not rigid, top down and uninspiring. It can’t be or it would fail."
Gregory Dodds, Ex-snr trade commissioner, Japan & Vietnam veteran

Never more strikingly was this demonstrated than on a sunny Tuesday afternoon in Viet Nam 45 years ago in a battle which almost saw one of his companies annihilated. One which almost no one noticed.

Much of the literature I read today about leadership and management refers to the need to dismantle traditional, ‘military’ command and control structures to empower teams and a stronger corporate culture.

Yet that ignores the point the best military leadership is not rigid, top down and uninspiring. It can’t be or it would fail.

There is a clear difference between military and commercial leadership. The Australian Diggers did not call Viet Nam “the two-way rifle range” for nothing.

The Army has taught and tested leadership at least since Duntroon’s foundation in 1911. Without military leadership soldiers will withdraw into self-preservation mode and become easy prey for a more experienced enemy.

On that day in 1971, the 33 Regiment of the North Vietnamese Army had initiated battle with a very clear objective: inflicting major casualties on Australian forces as they left Phuoc Tuy Province to return to Australia.

Province were the very best the North Vietnamese army had to put in the field against us. While there are real differences between military and commercial leadership, the essence of leadership is evident in similar themes. And Jim demonstrated them.

THE BATTLE OF NUI LE

Nui Le, the last and nearly costliest battle of the Vietnam War for the Australian forces, almost never happened. The 33 Regiment, one of Hanoi’s very best units, had been sent into Phuoc Tuy Province to deliver the Australians a crushing defeat and be seen to be driving us out of the country.

After setting up a major battalion ambush to catch an Australian relief force coming up the road from Nui Dat, they staged a couple of local incidents and then sat back to wait. They waited. And waited.

I’d like to say we were awake to them from the beginning and refused to be drawn but in truth our inaction was more due to a preoccupation with leaving Nui Dat for good in a couple of weeks.

Besides, both of the local attacks had been beaten off with casualties to the enemy. Why should we bother?

Not all of us however were so dismissive. SAS patrols had found recent trails left by hundreds of heavily laden men moving rapidly into the Province and the Task Force Commander had launched Operation Ivanhoe to check out the area and ensure our last few weeks at Nui Dat would be easy ones.

This task was given to Colonel Jim Hughes’ 4 Royal Australian Regiment and predictably they soon came across the trails discovered by the SAS. They perhaps unwisely chose to follow one of them. I say perhaps because this is what infantry does, it pushes on with scant regard for danger.

Had they known who was ahead of them, they may have been a lot more cautious. But after waiting in ambush on the road for five fruitless days, the Vietnamese Regimental Commander had decided that very morning to lift the ambush and return to the deep jungle of Long Khanh Province.

One battalion had already left the area and most of the ambush battalion was moving when the Australians finally turned up - but not when or where he anticipated.

The commander knew his men could withstand air strikes and enemy artillery was all out of range (or so he thought); if he deployed his soldiers well and was even a bit lucky, he may yet discharge his mission.

By late afternoon on September 21, 1971, they pretty well had D Company where they wanted them - almost totally pinned up against an impregnable bunker system with dozens of assault teams streaming into a creek bed behind them to close the nutcracker.

One blast from the Battlefield Director’s whistle would launch hundreds of NVA troops into the poorly defended rear of D Company. It would all be over in minutes.

But that didn’t happen. Kept separated from his charts and radio by the zealous attentions of an NVA machine gunner, the artillery officer (FO) attached to D Company ended up lying face down in the mud in the gathering gloom doing the trigonometry for an artillery strike in his head and then yelling the fire mission coordinates to the radio operator.

A minute later, the distant stuttering of guns far to the west told him the shells were on their way. Would they land and would they be in time?

They were in time and right on target. While they might not have terrified the assault teams of 33 Regiment, they must have given the Regimental Commander cause to reconsider. Accurate artillery fire and the rapidly falling night were both new factors and he would not risk the lives of his men needlessly.

Furthermore, the Australians might well have been trapped but they would not go down without a hell of a fight. Shortly afterwards, the assault teams were glimpsed going back out of the creek bed and by morning, the 33 Regiment had disappeared.

So where was Colonel Jim, the armchair strategist might ask? Well, physically he was on top of Courtenay hill anguishing about the fate of D Company and watching the dust and smoke billowing up from the battle several kilometres away.

But he had already made his most telling contribution during the previous two years with his sunny and persistent confidence his company’s best WAS good enough.

The battalion withstood the very best the NVA threw at it but not with any Hollywood-style antics on his part. He had already said what needed to be said and it was now up to his soldiers to make those words good. They did. 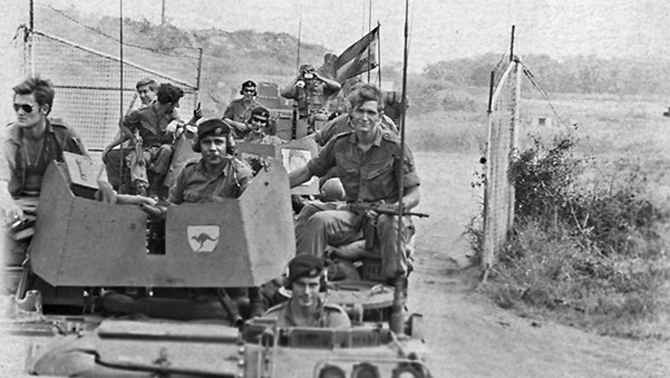 The road to Nui Le had been a long and hard one for the Fourth Battalion. The training grind in Australia had been incessant and unforgiving, a chance to make mistakes (only once) and avoid making them under the unforgiving gunsights of the NVA.

At this stage, Jim Hughes was everywhere. In Viet Nam itself however he made the support of the soldiers his number one priority; his officers and soldiers could be trusted to carry out the field operations with only minimal supervision.

RELATE TO THE PUNTERS

Ultimately it’s the soldiers who do the fighting and they were the people with whom Jim spent the most time.

His appetite for their opinions on the best way to operate seemed bottomless - because it actually was. He remarked once he could tell the quality of a unit quickly by soldiers’ willingness (and ability) to argue about the most mundane items of tradecraft.

People marvel at a leader’s ability to remember subordinates’ names but no one is going to forget (ever) the Colonel jotting down their idea on using gardening shears in his notebook.

We Australians expect leaders to lead but it’s all too easy to become a tall poppy. At first glance, Jim Hughes seemed to have lost this battle before it even started.

Everything about him, from his patrician nose, his immaculate turnout and his air of certainty spoke of a ‘type’ Australian soldiers have been learning to hate forever. That never happened with Jim.

Perhaps this grand self-confidence always seemed to be about us as a collective and not just about him. Whatever it was, it worked.

While people, particularly Australian people, detest arrogance they are more afraid of well-intended stupidity. Jim always gave the impression he knew what he was talking about.

But his confidence was the type which includes others, not one which relegates them to their place on the totem pole of bureaucracy.

General De Gaulle only spoke directly to the French people by radio twice in his long career as President and both times his opponents were vanquished.

Everybody listened to his speeches closely because they were so rare. While Jim had few things in common with De Gaulle, except perhaps the nose, they did share this uncanny ability to talk directly to their mass audience when they had to. But only when it was really necessary.

Jim was authentic – a quality now increasingly recognised as critical for good leaders. A colleague remembers listening to his chief executive drone on about leadership and then opine his own experience in amateur repertory had been very useful in helping him develop his leadership skills My friend acidly retorted “that may be so Dick but they mustn’t know you’re acting”.

There was no artifice about any of this with Jim Hughes. The man you saw was the man you got.

In one of the eulogies at Jim’s funeral, someone said his life had been driven by three dictates. The first two, integrity and honour were entirely familiar to anyone from Duntroon, the Royal Australian Military College. But the third one, kindness, was completely out of left field.

I remember one of my colleagues was not only a conscientious objector, more than bad enough in an infantry battalion bound for Viet Nam, but was also gay.

This was a precarious position indeed in the 70s but when he finally summoned up the courage to speak to Jim about this dilemma, he was heard out in respectful silence, asked a couple of questions about his own hopes of how this should work out and then told to “leave it with him” and they could talk again on Monday.

My colleague left Townsville for Sydney the following morning and left the Army without prejudice the day after. Do remember this took place 47 years ago in an Australia was not confounded by the great Plebiscite question.

In such a situation, the result in those times could have been very different. Jim wasn’t like that. Today he would be called an inclusive manager who respected diversity but that was his nature.

Would Jim have been such a great leader today, in the age of selfies and Facebook? My answer, from my time in the military and my much longer time in the corporate world, is good leadership is good because it satisfies timeless criteria.

Jim was a great leader not because he led from the front – he was not actually in the battle that day – but because he led from within. Those who served with him knew what was expected, they knew they had his respect, that what he expected them all to do was not whim but an informed understanding of what was needed.

Jim and his ilk would probably have detested social media and adhered to who they were and what they had learned the hard way.

I think they would have just simply said good leadership is good because it satisfies timeless criteria. The greatest sign of his leadership was what his men could do when he wasn’t actually there.

LONGREAD: Will mobile banking be an Atom bomb or damp squib?

The launch of Atom Bank in the United Kingdom in 2016 as a new mobile bank regulated by the Bank of England (BoE) heralded the onslaught of a variety of mobile-only banks in that country.
Economy

My great grandfather was a banker in Brookings, South Dakota – a town built around a rail junction deep in farm country. His name was John David Wilson but everyone called him ‘JD’.