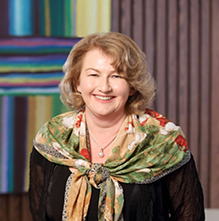 The green and sustainable-finance opportunity for banks is real: by 2040, $US11 trillion is expected to be spent on renewable energy with renewables to generate 36 per cent of electricity globally.

Credible, evidenced-back forecasts indicate about 45 per cent of Australia’s power capacity will be located ‘behind the meter’ by 2040, requiring over A$40 billion in investment.

Of course the transition to a lower-carbon, more-sustainable economy is not just a financial story – the impact will be more significant for other sectors, notably the transport and water industries.

“Sustainability is on the radar of all the Australian banks.” - Christina Tonkin

ANZ sees green finance as a business opportunity and has done so for some time. The bank appointed its first sustainable finance banker six years ago and has steadily grown the team. The bank’s advisory business is heavily weighted towards renewables transactions.

The sustainable finance team has arranged almost $US10 billion ($A14 billion) in green, social and sustainability bonds, tapping the increasing appetite of investors for ESG exposures, for the benefit of customers. The bank is a member of organisations for both the Green Bond Principles and Climate Bonds Partner’s partners program.

In October 2015 ANZ set itself a target of $A10 billion to fund or facilitate the customer transition to a lower-carbon, more-sustainable economy by September 2020. Earlier in 2018 ANZ increased its ambition to $A15 billion and it’s pleasing to note it has exceeded $A8.3 billion.

While ANZ likes to think of itself as a leader, sustainability is on the radar of all the Australian banks. The banking and insurance industries in Australia are working on a sustainable finance roadmap to help achieve national, regional and global goals on sustainable development.

There are moves in Australia and New Zealand to convene expert groups – including the banking industry - to provide government with recommendations on creating sustainable finance pathways. This is following models already established in the EU, Canada and the UK.

In addition to developing a portfolio of green assets, ANZ is constantly reviewing its brown coal assets in line with the Task Force on Climate related Financial Disclosures (TCFD).

In 2017 ANZ was the first bank globally to report using the recommendations of the TCFD, helped by a year-end reporting cycle - and I might add, a lot of hard work from head office. The report focused on customers most exposed to transition risk.

ANZ monitors its risk at an industry and individual-corporate level. The bank has active dialogues on strategy with management of companies exposed to sensitive sectors, including the coal industry.

All transactions in sensitive sectors attract enhanced due diligence procedures. ANZ will not finance the new build of coal fired power stations emitting more than 0.8t CO2/MWh and CEO Shayne Elliott has said publicly ANZ does not expect its thermal coal exposures to increase.

The trend line shows a decline in lending to the most carbon-intensive energy in ANZ’s portfolio.

All that said, ANZ supports a just and orderly transition to a lower carbon economy. Social costs should not be treated as a second-order issue.

Partly driven by efforts to curb air pollution in China, the market has seen the global price-premium for better grades of iron ore increase because higher grades require the burning of less metallurgical coal to convert iron to steel and hence are less carbon intensive.

Likewise, ANZ expects an increasing price premium for energy coal with higher calorific and lower particulate properties to keep the lights on in Asia.

Nobody is blind to the need for coal to play a role in the transition to a low-carbon economy and indeed for better-quality coal to actually help reduce global emissions vis-a-vis poor-quality coal in the short-to-medium term.

This is an edited version of comments made at the Global Infrastructure Forum in Bali in October, hosted by the Asian Development Bank

Investor forecasts on climate change are more certain than the weather.
Sustainability

How will we break the endless energy circle?